A mobile browser will interpret a _____ event as a tap event in which a user taps a page object.â

These are the most valuable resources of the Caribbean islands. zinc waters manganese coconuts climate beaches

By 1980, the Soviet Union was ailing from all of the following causes EXCEPT one. Which one?

1. By 1980, the Soviet Union was ailing from all of the following causes EXCEPT one. Which one? (1 point) a declining economy rising infant mortality poor working conditions too many political reforms 2. President Reagan did all of the following EXCEPT (1 point) provide aid to Afghan rebels. call the Soviets an "evil empire." begin a military build-up. sign the Brezhnev Doctrine. 3. Gorbachev soon realized that economic reform would not succeed without (1 point) a Five-Year Plan. tractors. political reform. destroying the United States. 4. President Carter protested the Soviet invasion of Afghanistan by (1 point) starting an arms race. canceling U.S. participation in the 1980 Olympic Games. importing grain from the USSR. reuniting Germany. 5. Which of the following describes the Cold War during Gorbachev's leadership? (1 point) The Cold War intensified. The Cold War came to an end. The Cold War stagnated. The Cold War became a World War None

Which is the best meaning of the italicized word in the phrase “Are fervent with life”? a. frightful c. cautious b. cowardly d. passionate

The vertical file contains almanacs. True or False? Thanks so much for help. :)

What was the most important role textiles played in the Industrial Revolution? A) Mass-produced textiles meant that workers had more and better clothing. B) Industrialization of the textile industry led to more demand for cotton. C) Development of textile factories made domestic textile production obsolete. D) Machines invented to mass-produce textiles led to other inventions.

For the following pair of lines, identify the system by type.

A) consistent B) equivalent C) inconsistent 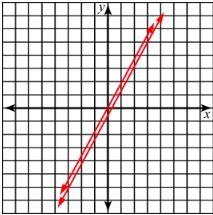